Growing Up with APD 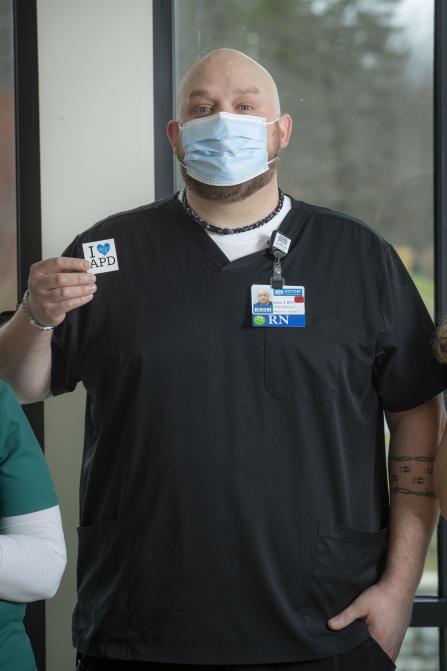 John "JT" Thibodeau Jr., BSN, RN, has worked at Alice Peck Day Memorial Hospital for half of his life.

Actually, a bit more than half. He started working at APD when he was a junior in high school at age 16.

"I have worked at APD for 19 years. I have seen a lot of change, renovations, turnover; I've seen people leave APD and come back," he said. "I have seen it grow and I am so glad I have been able to be a part of it."

How It All Started

Thibodeau's grandmother was working in the Community Care Center (CCC) in 2003. She helped him get a job in medical records filing paper into charts, "back when we had paper charts," he said. "I did this five days a week after school and worked during my school breaks and summers."

Thibodeau graduated from Lebanon High School in 2005 and enrolled at UNH. "Growing up, I thought I was going to be a doctor or vet but, once I started working at APD, I knew nursing was my path," he said.

Even as a college student, Thibodeau continued working at the Community Care Center, now known as the Robert A. Mesropian Community Care Center (RAMCCC), during breaks. He received his Licensed Nursing Assistant certification and transferred from medical records to the nursing staff. "APD provided me the flexibility to go to school and still be an employee during my breaks and summers," Thibodeau said.

In 2009, upon graduation from UNH with a Bachelor of Science in nursing, APD offered Thibodeau a job in same day surgery and post anesthesia care unit (PACU), which added critical care experience to his list of skills.

"I used to take care of orthopaedic patients in the PACU and, one day, one of the doctors asked me if I would be interested in being his nurse. I took this as a compliment," Thibodeau said. He transferred to the outpatient setting as a clinic nurse for Orthopaedics in 2021.

Thibodeau continued to grow – clinical nurse lead, clinic supervisor, assistant clinical manager, and clinical manager (his current role) – right along with Alice Peck Day. Flexibility, stability, and support – workplace values APD has always provided – will be key as he moves into the next phase of his life: starting a family.

"As it has always been my goal to be a nurse leader, APD sent me up with mentors and leadership training," said Thibodeau, who married Laura Egounis, a cardiac echo Sonographer at Concord Hospital, in September 2022. "Now APD offers loan repayment, which will help with my student loans. I owe a lot of my success to this hospital and all of the people who believed in me."