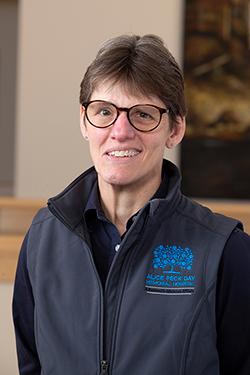 Dr. Mooney has been the President and CEO of Alice Peck Day Memorial Hospital since April of 2013.

She joined the Medical Staff at APD in 2000 as a full-time Obstetrician/Gynecologist and continued in that role until 2005 when she took a leave of absence to pursue fellowship training as a Veterans Administration Quality Scholar. During that two-year period of time, she received a Master’s Degree in Healthcare Quality Improvement from the Center for Evaluative Clinical Sciences at Dartmouth (now The Dartmouth Institute).  Upon her return to APD, she became the Medical Director of Quality and ultimately the Chief Medical Officer before transitioning to her current role.

Dr. Mooney is passionate about improving the quality of care that APD provides to patients.